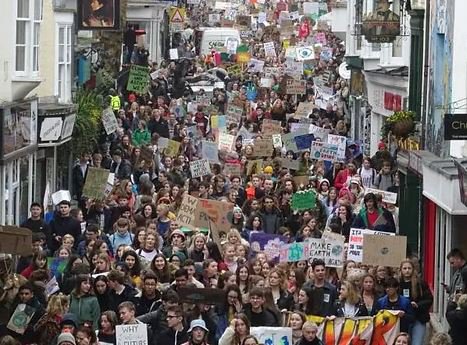 As a generation of parents, we need to admit that we took our eyes of the ball - from climate change, to Trump, to Brexit - we have allowed these things to happen to us and our children.  We can construct a complex analysis as to why; the truth is there are many reasons.  But perhaps one reason is that as families, we were more comfortable discussing house prices than talking politics round the dinner table. Indeed, even now political posts in local Facebook parents' sites are regarded as in bad taste - "not Brexit again!” Much safer to discuss (to death) hair salons for children and skiing holidays.  And maybe that would be fine, if it were not for the issues the world faces. So what can we do differently?

We all have great hopes for the young generation, in particularly in the view of recent #StrikeForClimate events. Inspired by Greta Thunberg, the Swedish 16-year old, recently nominated for a Nobel Peace Prize, starting a powerful global movement for politicians to act on climate change, 1 million worldwide took to the streets. It is suddenly ok for teens to strike. Children from tens of thousands of schools in the UK joined the protests in March and momentum is building. It is immensely promising how much has been achieved in a short time by the collective will and organisation of young people, acting on issues that they care about and don't trust the older generation to fix. So the solution is that we need more Greta Thunbergs. And this is where we all come in.

While also guilty of mundane dinner party conversations, as a parent I always held strong beliefs that young people should participate. Not just for the sake of a badge or a Duke of a Edinburgh Award, but every day and generally.  Whenever we went to vote, my now 12 year-old son tagged along too. My regret is that my voting research was superficial - I did not spend time researching the MPs we voted for and decisions were mostly based on party politics, hence not everything could be articulated well enough when he asked questions. But even that small step of engaging in voting (and demonstrations) hopefully means that my son will understand the importance and relevance of voting and appreciate that it is his important democratic right when he grows up. It also means that he and even his seven-year-old sister are interested in politics. My hope is they retain that.

Of course, with hot debates around Brexit and climate change unleashed, increasing numbers of young people feel more politically engaged now.  Two years ago, eye-brows may have been raised when I told friends that my children were coming on a march, with comments such as ‘do they really understand why they are marching?’  But now, more and more of our friends do the same. Whilst I know parents who stopped their kids going to the first UK climate strike, on the advice of their schools,  many of them then allowed their young activists to go along for the second one as the movement snowballed. And here lies the answer.

So, if we want these young people to make a difference, to clear up the mess we created - from politics to environment - then we have a big role to play. We should encourage them to get involved and not only for UCAS points. As parents we have to be comfortable to debate politics and not view it as a taboo subject, we should stop sanitising their environment and encourage them to be engaged and active in inspiring changes in our political and environmental landscape. So in the spirit of this (and because I won't have it any other way), you can be certain, my two will be marching this Saturday, so we all can have our final say.

How do you nurture financial capability in children and young people?

What is the best age to start volunteering? We say start young!

Babysitting: let us think outside the box

Debate: Will a lie-in help to improve my teenager's grades?

From tasks to start-ups … how young entrepreneurs really start...

Skills Development 1: What practical steps can I take to improve my chances of securing a place at a medical school